The priorities of the EP Presidency of the PA-UfM

The priorities of the EP Presidency of the PA-UfM

The European Parliament Presidency of the Parliamentary Assembly of the Union for the Mediterranean set the priorities for their work during the 14th Plenary Session held on 28-29 April 2018, in Cairo.

The European Parliament Presidency is focussing on migration and looking to find solutions that go beyond an intergovernmental approach by involving parliamentary diplomacy.

In his speech in Cairo, European Parliament’s Vice-President David Maria Sassoli said the EP Presidency was working to set up the new secretariat, including the nomination of a Secretary General ad interim, and assess the budgetary needs.

The Cairo plenary also endorsed the decision to strengthen links with the UfM seat in Barcelona. The PA-UfM Bureau, together with the Political Committee Chair, would undertake a mission to Israel and Palestine, where they would meet their counterparts from the Knesset and the Palestinian Legislative Council.

The plenary approved the following committee recommendations by consensus:

·         Culture Committee: Consolidating the values of tolerance and dialogue between cultures for combating extremism and terrorism.

·         Women’s Committee: The role of women on combating radicalisation, extremism, violence and terrorism in the Euro-Med. 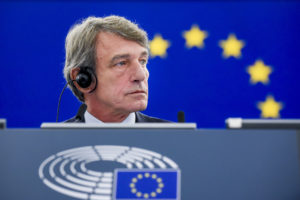