Holding of the UfM regional forum and speech of Ayala Sender

Holding of the UfM regional forum and speech of Ayala Sender

The Third Regional Forum of the Union for the Mediterranean was held in Barcelona on 8 October 2018 to commemorate the 10th Anniversary of the organisation.

The Forum highlighted the importance of regional cooperation in addressing common challenges and creating common opportunities in the Euro-Mediterranean region.

UfM Members expressed satisfaction that the union had embarked on more than 50 UfM projects since its establishment. In March 2018, the UfM had lent decisive financial and political support towards the construction of the Gaza Central Desalination Plant that should provide safe water for the population of the Gaza Strip, Palestine.

UfM members also endorsed the review mechanism for the selection and labelling procedures of projects in order to strengthen their ability to add value.

The chair of the Delegation of Relations with Maghreb Countries Ines Ayala, representing European Parliament President Antonio Tajani in his capacity of President of the Parliamentary Assembly of the Union for the Mediterranean, addressed the Third Regional Forum of the UfM.

She stressed the need for further efforts to develop cooperation and underlined the role of the Assembly in the orientation and evaluation of the projects of UfM.

Ayala Sender highlighted the issue of migration and refugees in the Mediterranean, security and terrorism, illegal migration, unemployment and human rights violations.  Ongoing social, political, economic crises and climate change, she said, had to be tackled through better intra-regional and inter-regional cooperation in the Mediterranean.

The Parliamentary Assembly of the Union for the Mediterranean, as a parliamentary and economic diplomacy actor, was convinced that the solution to end current conflicts was to promote sustainable and fair growth for all populations concerned, Ayala said..

She underlined the need for “a global approach” and “an effective partnership” in order to ensure stability and security in the region. In this regard, she emphasized the importance of multilateral cooperation, which not only reinforced links between the UfM and its Parliamentary Assembly but also roped in the United Nations, and notably the UNHCR, IOM and regional partners like the Arab League and the African Union.

The Desalination Facility for the Gaza Strip Project 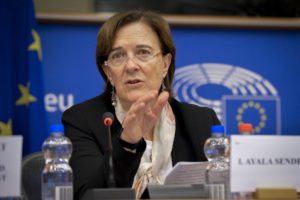